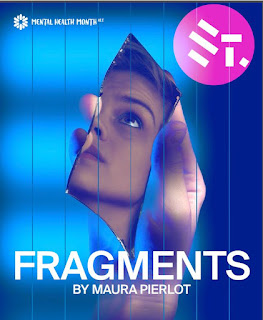 Fragments has a didactic purpose, especially appropriate at this time of year as young people (in the southern hemisphere) complete their Year 12 assessment and receive their Australian Tertiary Admission Rank (ATAR) results.  The author writes: “Please help create awareness about mental health issues, while reaching out to those who may be struggling, now and in the weeks ahead.”

It’s a kind of theatre-in-education as much for parents and children (and even grandparents) as for social decision-makers in modern times.  I wondered if the ubiquitous nature of social media on the internet has made things worse than in my time in the 1950s facing what Maura Pierlot describes: “Fragments embodies the theme that stress at home, at school and in life is challenging young people beyond their usual coping abilities, often leaving them disenfranchised and vulnerable.”

These eight young people have the same central concern that I remember: is my outward presentation true to my real internal self?  Under the onslaught of 24/7 Instagram images and over-the-top positive and negative judgemental commentary from peers, I think struggling through that ten-year period from, say, 14 to 24, which I remember well, is made far more fearful for this generation.

No wonder mental health issues are so much more on the public agenda today than in yesteryear.  So it should be, and this play has a valuable role to play.

The concept of fragmentation within each character’s personal perception of themselves and between themselves and others is displayed visually in Imogen Keen’s use of solid black cubical rostra blocks, carried about, put in place, stood upon and even thrown; contrasted with sheets of almost-transparent material, some complete rectangles like windows, some sharply shaped like accidentally dropped window glass.  Characters carry these about at times, looking into them as mirrors, looking through them, being seen through them: looking always in danger of shattering.

Lighting was used very effectively to emphasise the points of separation and isolation – and finally to reach a general sense of hope, the last word spoken.  Sound provided a background of current music and song, which gave the young characters a common context; while action was often punctuated by the beeps, ringtones and notification tones we constantly have to respond to from our smartphones.  And, I thought, G5 is only just beginning to make its presence known!

Each of the eight speak to us directly, and each actor performed very realistically.  This is an important achievement on each of their parts, because being ‘fragments’ means that there is very little direct interaction, and no throughline for an actor to use in developing new understanding within a character.

The situation, as I understood it, was that Mason, as school captain, has to give a speech to the school as he graduates at the end of Year 12.  Each character is different in their own particular way from any of the others.  The issues which arise include at least racism, sexuality, body image, parental academic expectations, parental divorce, the education system’s control of students’ future possibilities, and the Black Dog - which, as Mason points out, is not the friendly trusting pet you want to pat.

The theatre experience backgrounds of these young performers, not very much older than their characters, listed on the online program at http://www.thestreet.org.au/shows/fragments-maura-pierlot is in itself a positive record of the school, youth theatre and young persons’ professional training available in Canberra and further afield.  The results shown in Fragments represents the very hope that the play concludes with.  Here are young people, speaking through Maura Pierlot’s characters, who are achieving what she hopes: “I wanted to explore the healing that may come from looking outwards – from our connectedness to others and our realisation that we are not alone.”

This is what theatre does, and this production does it very well.